George Borrow (1803-1881) was a farmer who went on long walks, lasting days or weeks, through the British countryside. 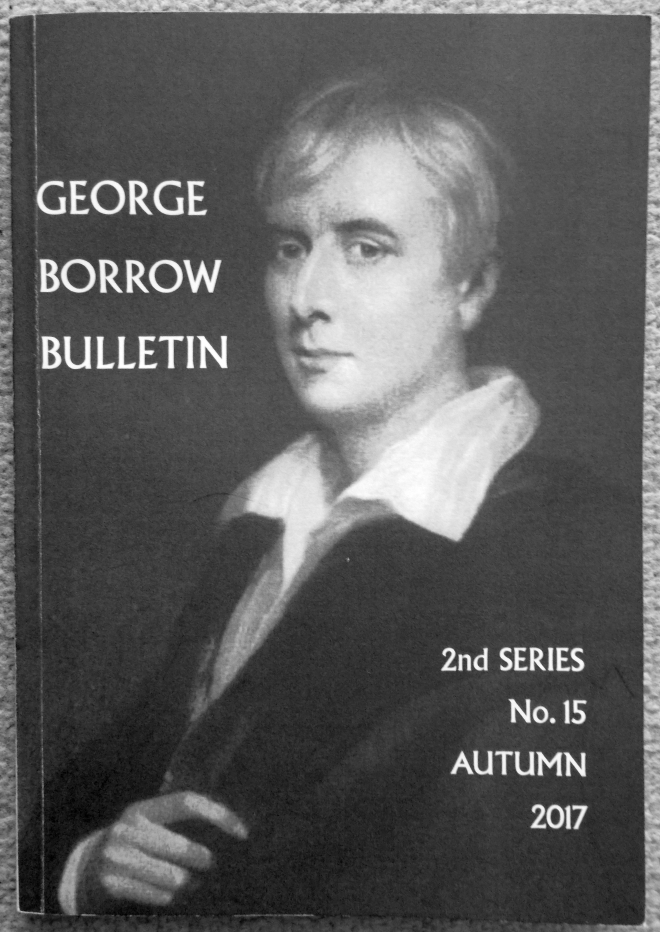 EARLIER THIS YEAR I went for a long walk through southern Wales. Ever since reading Borrow’s description of his three-hundred-mile trek in Wild Wales, I have at various times tried copying some of his achievements. This year I happened to be the same age as Borrow when he made his mammoth journey from Llangollen to Chepstow, so I devised a plan to walk the length of Wales using footpaths, bridleways, permissive paths and minor roads. I trained myself physically for the distances involved, asked advice from friends who are experienced walkers, acquired the necessary equipment and on 28 June set off from the southern-most tip of mainland Wales, my intention being to reach the north coast within a fortnight.

It didn’t quite work out that way. The boots I had chosen could not cope with the water-logged condition of the countryside, the first twenty-four hours of my trip coinciding with the downpour that followed the June heat wave. On top of this, a surprising number of the rights-of-way I’d intended to take were impassable due to poor maintenance, heavy overgrowth or deliberate blocking, adding many miles to my originally planned distances. 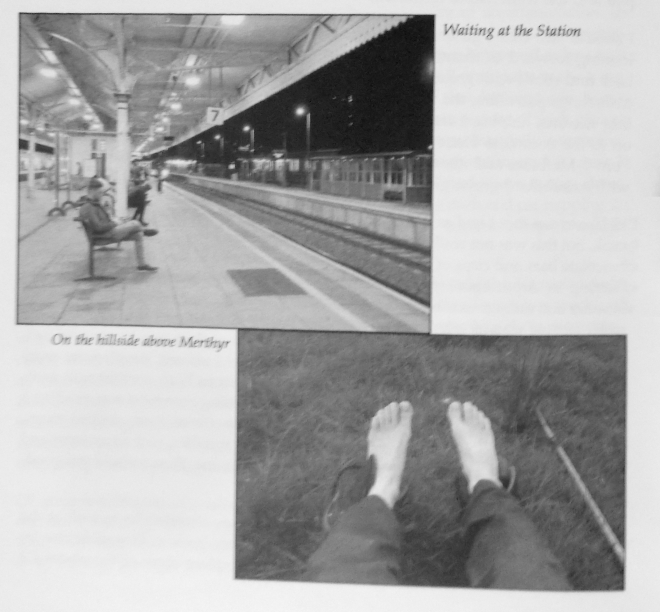 By the end of the second day the impossibility of the task I’d set myself was becoming apparent. I sat on the hillside above Merthyr Tydfil looking down at the spot where, 163 years earlier, Borrow had strolled by, and I began thinking about the differences between long-distance walking in his day and now. With all my dedicated clothing, footwear, maps, GPS and other specialised equipment, I came to the conclusion that Borrow benefited from advantages not available to the modern walker, and that I would have to reconsider my plans if I was to attempt another such expedition.

Of greatest significance, it seemed to me, was that apart from some deliberate excursions over hills of special interest to him, Borrow was travelling by road. He was taking the most direct and least gradient-challenged routes between towns and villages. My route wandered all over the place and not infrequently involved steep ascents or descents, sometimes unexpected. One innocent-looking bridleway on the map took me on a seven hundred and fifty-foot climb up a bracken-covered, sixty-degree slope and cost two-and-a-half hours with only one third of a mile distance gained. I thoroughly enjoyable the experience, but from my journey’s point of view it was clearly impractical. 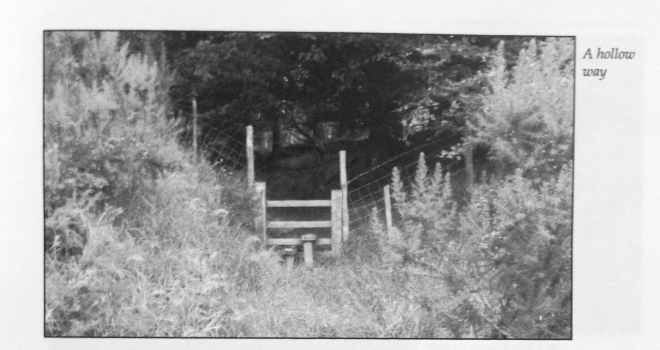 The road surfaces of Borrow’s day would have been relatively foot-friendly, being compacted dirt and gravel and probably well-vegetated in places, not unlike some of today’s National Trails. Excessive distances on modern metalled roads are a different matter, the constant pounding of the feet on the hard surface leading to painfully aching soles and ankles. There is also the matter of the traffic. So many drivers make minimal effort to give pedestrians adequate berth — on one country road I had to bury myself deep in a hedge when a van and lorry chose to pass each other parallel to me with complete disregard for my welfare.

Another advantage enjoyed by Borrow was the availability of accommodation. In that era of travel by foot, horse, carriage and rail, hostelries appear to have been plentiful. I live in a small town in the centre of England which once happened to be a hub of the stage coach network. When I was little there were still nine pubs in the town which had a population of only two thousand, a relic of that former trade. Some premises still retained the wide, arched yard entrances characteristic of such places.

These days accommodation is relatively sparse and often prohibitively expensive, and needs planning and booking well ahead to avoid disappointment. Last year I walked across part of southern England, assuming I would find places to stay along the way. There were none. I spent two nights walking in the dark and cat-napping in long grass, hoping that no other night-time wanderers or curious livestock would either bother or be bothered by me.

To good roads and accommodation, the evident hardiness of the Victorian foot can be added. Borrow was, after all, a hard-working farmer living in a world of mainly pedestrian travel. No hopping in the car or even on a bicycle to get somewhere. I once met a French farmer’s son who told me how, in the summer, he rarely wore shoes. The consequence was that the soles of his feet would become as thick and as tough as leather and even sharp stones would not bother him too much. When he put shoes on again in the winter this layer would peel off like a snake shedding its skin. I imagine the soles of Borrow’s feet, and possibly pretty much everyone else in Victorian Britain, were of a similarly tough nature, not the soft, pampered appendages of today.

Of great importance, of course, were his boots, hob-nailed leather affairs. Borrow mentions needing them re-soled a couple of times during his Llangollen-to-Chepstow walk and on another occasion how sharp stones on a mountain track were cutting through them and hurting his feet, but little else. There were no alternatives, of course, which may have disinclined him to comment further, assuming his readers would be well-familiar with such issues. Perhaps walking on the relatively well-drained road surfaces and luck with the weather meant that for him moisture problems were not such an issue and his treasured worsted stockings seem to have done their job well. 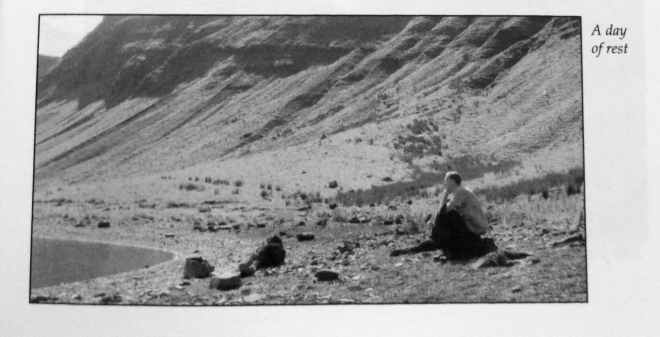 Not so with me, having to plough through tall, wet, lush vegetation on regular occasions. My boot problems were a mixture of bad luck and bad judgement. Bought especially for the purpose, they had proved comfortable on trial walks, but I realised later that I had never tested them in seriously wet conditions. They were desperately inadequate at minimising water ingress. Blisters or damaged skin in dry boots can be treated or tolerated, but long miles in permanently damp footwear eventually caused my skin to weaken and break. After three days of this, I had a rest day with my feet up and my boots drying, and the next day took a short walk to test things out. The skin, however, was damaged beyond immediate repair and the walk had to terminate.

I should add that I go on such walks knowing there will be difficulties, indeed looking forward to them, and I enjoyed every footstep of my journey. I’ll look back and recall with great pleasure such things as ‘the battle of bracken hill’, the hedgehogs patrolling the woodlands behind Rhoose in the dark, the many trickling streams, helping a farmer lift a ‘weed topper’ on to blocks so he could work on it, the countless bleating sheep, chatting with the occupants of the house at Pont-y-Meibion, and above all the unique, quiet beauty of the Welsh landscape with its subdued greys, greens, browns.

I’d like to say that I had as many interesting human encounters as Borrow did in his book, but this was not really the case. Walking years ago I would find myself sharing chocolate bars and cups of coffee with complete strangers in the middle of nowhere, chatting in depth about paths, the qualities of different brands of backpack, the weather and numerous other subjects, but this is no longer so easily accomplished. So many people wander silently by, earphones firmly inserted and shuffling through the tracks on their iPhones, often with a frustrated look on their face, barely acknowledging any others.

Thankfully, at the one Youth Hostel I utilised, people were more sociable — there was a woman who was walking the Beacons Way, another who invited me to join a holiday club, and a vegan, yoga-practising man who was reading a book about aliens secretly taking over the planet. We shared food, studied maps, made cups of tea for each other and chatted about the weather, past adventures and the gradual dissolution of the YHA. It was all very pleasant. Then we said our good-byes and went our respective ways.

After my three days and eighty-six miles, I took a few short walks to look at the scenery around Llandeusant and then made my way back to Warwickshire by public transport, then returned to Wales by car to explore some of the places l’d intended to travel through on foot. The most moving was Huw Morris’s grave at Liansilin. Having been impressed by Wild Wales at a young age, to actually be crouching at the same spot as the author thirty years after first reading the book was surprisingly affecting.

I still have many questions for Borrow. How did he cope with the cold, wind and rain during his late-autumn walk and at a time when the climate had not yet completely recovered from what historians call ‘The Little Ice Age’? Was he just lucky with the weather? Did he really carry nothing other than an umbrella, a spare pair of stockings, a shirt, a razor and a prayer-book? What about food? Ile mentions hearty meals in some places, but how did he manage the majority of the time? Did he walk all day on last night’s supper? Had I really met him on my descent from the hillside above Merthyr, I would have dearly loved to study his boots and ask him that question most burning in my mind, “Excuse me, Mr Borrow, how are your feet today?” 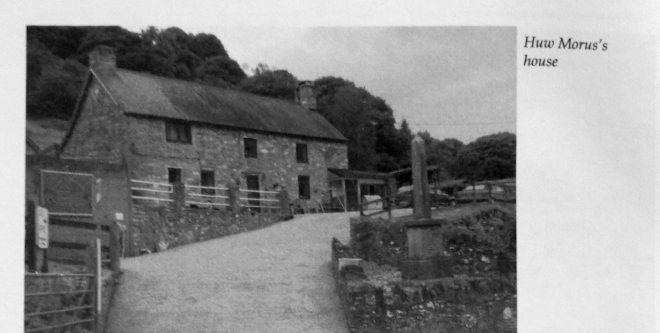